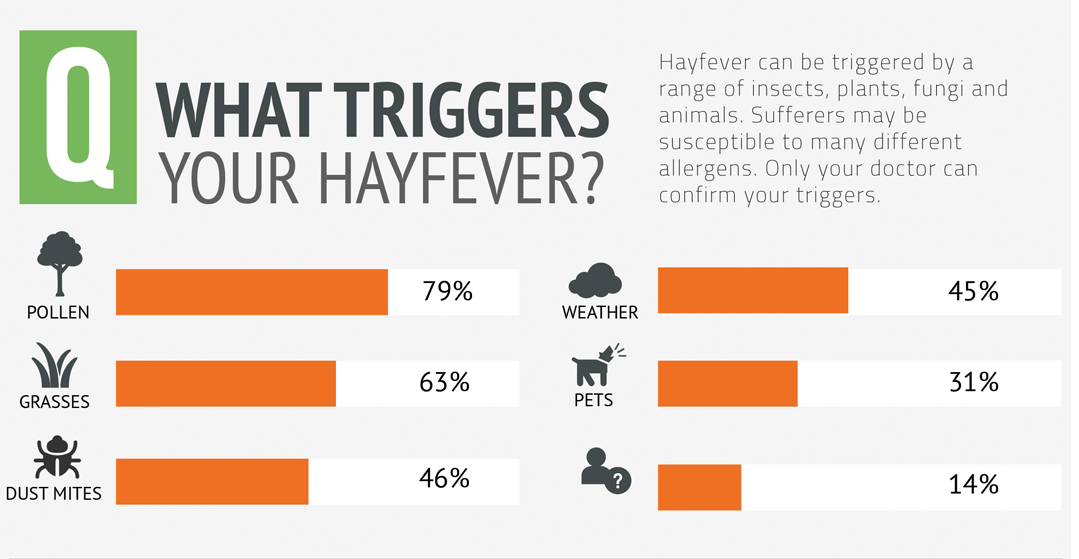 Most of us look forward to springtime, but for at least one in five people in the UK it signals the start of the hay fever season and months of sniffling and itching caused by pollen allergy. But fortunately there are a variety of ways to ease hay fever symptoms, and a new vaccine looks set to revolutionise treatment by potentially offering a cure within three years.

Hay fever is an allergic reaction to pollen that is usually worse in the early spring and summer when the pollen count is at its highest. The most common trigger (or ‘allergen’) is grass pollen, which causes symptoms such as a runny or blocked nose, itchy eyes, sneezing and coughing.

Hay fever is often trivialised as a minor condition. However, the symptoms can negatively affect concentration levels, sleep, work and overall quality of life, as well as making asthma worse.

The good news is that there are a variety of things that can help to ease the symptoms of hay fever. The NHS recommends wearing wraparound sunglasses, showering after being outside and keeping windows shut. They also suggest regular vacuuming and dusting with a damp cloth, and using pollen filters for car vents and vacuum cleaners. Things to avoid include cut grass, cigarette smoke and drying laundry outside.

A nasal barrier balm, such as petroleum jelly, can be used to coat the nostrils and trap pollen before it enters the nose. Allergy UK, the leading national charity providing allergy advice, says that this is an extremely effective preventative measure: “It’s the first thing we suggest to people who contact us”.

When the pollen count is very high or symptoms are severe, medication such as antihistamines, nasal steroid sprays, anti-allergy eye drops and other prescription drugs can be used.

If severe symptoms persist, immunotherapy – a way of reprogramming the immune system to stop an adverse reaction to an allergen – may be considered. This involves injecting or swallowing a tiny amount of allergen, gradually increasing the dose over several years until it can be tolerated without major symptoms.

This way of ‘desensitising’ the immune system using natural extracts of allergen has been the mainstay of allergy vaccines for over 100 years. However, a recent paper in the Journal of Allergy and Clinical Immunology has reported on a new type of vaccine that is the first in the world to target grass pollen allergy using synthetic allergen proteins.

A new clinical trial of the synthetically manufactured vaccine BM32 showed that four injections in the first year and a top-up in the second year of treatment relieved hay fever symptoms by at least 25% and in some by up to 41%. The lead author explained: “The more severely the allergy sufferer is affected by grass pollen, the greater the beneficial effect following vaccination.”

Scientists from the Medical University of Vienna, who are developing the vaccine with partner company Biomay AG, hope that these encouraging results mean that people will be symptom-free after several years of booster jabs.

Although the new vaccine requires far fewer injections and has a better safety profile than traditional injection immunotherapy, the British Society for Immunology cautioned: “The trial participants experienced a high frequency of local side effects, which were unexpected and warrant further investigation in larger numbers of patients.”

If planned follow-on trials successfully demonstrate the vaccine's safety and efficacy it could potentially offer a much-anticipated cure for grass pollen allergy in just three years. Development of a preventive form of the vaccine to stop people from ever developing hay fever is also planned. So it may not be long until pollen no longer prevents people from enjoying the joys of spring.

Spread the cost of your treatment

THE BEST OF CARE